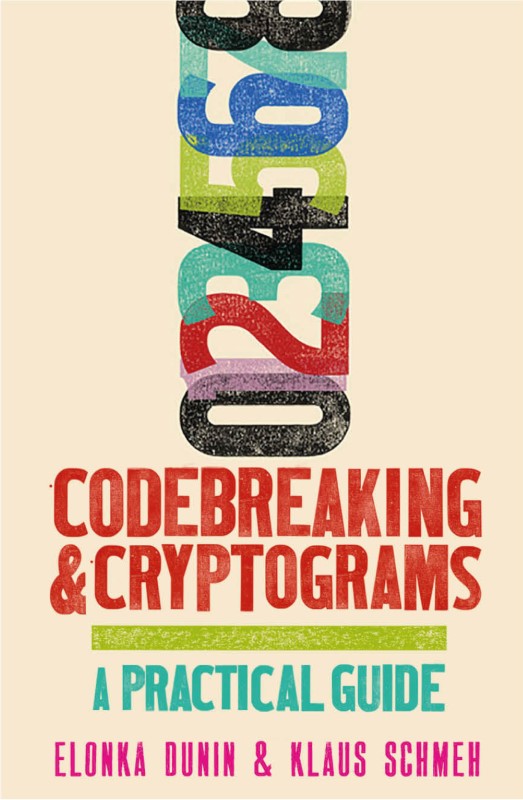 This practical guide to breaking codes and solving cryptograms by two world experts, Elonka Dunin and Klaus Schmeh, describes the most common encryption techniques along with methods to detect and break them. It fills a gap left by outdated or very basic-level books.

This guide also covers many unsolved messages. The Zodiac Killer sent four encrypted messages to the police. One was solved; the other three were not. Beatrix Potter’s diary and the Voynich Manuscript were both encrypted – to date, only one of the two has been deciphered. The breaking of the so-called Zimmerman Telegram during the First World War changed the course of history. Several encrypted wartime military messages remain unsolved to this day. Tens of thousands of other encrypted messages, ranging from simple notes created by children to encrypted postcards and diaries in people’s attics, are known to exist. Breaking these cryptograms fascinates people all over the world, and often gives people insight into the lives of their ancestors. Geocachers, computer gamers and puzzle fans also require codebreaking skills.

This is a book both for the growing number of enthusiasts obsessed with real-world mysteries, and also fans of more challenging puzzle books. Many people are obsessed with trying to solve famous crypto mysteries, including members of the Kryptos community (led by Elonka Dunin) trying to solve a decades-old cryptogram on a sculpture at the centre of CIA Headquarters; readers of the novels of Dan Brown as well as Elonka Dunin’s The Mammoth Book of Secret Code Puzzles (UK)/The Mammoth Book of Secret Codes and Cryptograms (US); historians who regularly encounter encrypted documents; perplexed family members who discover an encrypted postcard or diary in an ancestor’s effects; law-enforcement agents who are confronted by encrypted messages, which also happens more often than might be supposed; members of the American Cryptogram Association (ACA); geocachers (many caches involve a crypto puzzle); puzzle fans; and computer gamers (many games feature encryption puzzles).

The book’s focus is very much on breaking pencil-and-paper, or manual, encryption methods. Its focus is also largely on historical encryption. Although manual encryption has lost much of its importance due to computer technology, many people are still interested in deciphering messages of this kind.